Province reveals pedestrian-centred overpass, trail. Former premier Duff Roblin dreamed not just of building a floodway but of developing the floodway corridor for recreational use for all Manitobans. The first one he got built in short order. The latter took 50 years.

On Friday, the province gave a glimpse of the first phase of that floodway development that includes construction of a $3-million pedestrian overpass bridge spanning Highway 59, across from the Birds Hill Provincial Park entrance. 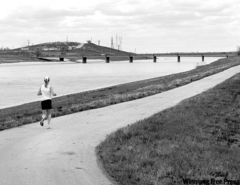 PHOTOS BY KEN GIGLIOTTI / WINNIPEG FREE PRESS A jogger on an existing trail adjacent to the floodway. A 48-kilometre recreational trail is being built in the area.

The bridge is a key component in a 48-kilometre recreational trail for non-motorized travel being built along the west side of the floodway here. The bridge will also connect cyclists and others with Birds Hill Park, which has over 100 kilometres of additional trails, starting at the Cedar Bog Trail. The pedestrian bridge and a portion of the trail — from about Garven Road to Lockport — is expected to be completed possibly as early as August. Finishing touches are likely to continue until fall when a grand opening is scheduled.

The entire trail, extending as far south as Duff Roblin Provincial Park, at a cost of $6 million in addition to the bridge’s cost, will be completed by next summer. It will be open for four-season use including walking, jogging, cycling, in-line skating, cross-country skiing, even dogsledding. There will be a dedicated toboggan hill close to Kirkness Road, north of the Birds Hill Park entrance. There will be up to six staging areas where people can park and load their bikes.

Janice Lukes, a director with the Winnipeg Trails Association, expects some people will be skeptical. “It’s pretty hard for the average Joe to get the picture,” she said. But Lukes has no doubt the trail system, once built, will attract hordes of users. “Just look at the usage that old rail line (the former CPR rail line between Gateway Road and Raleigh Street the city converted into a biking/hiking trail) gets. People are really getting into this,” she said.

The floodway project is just the north extension of the trail system being built through Winnipeg. You could soon be able to travel on a dedicated recreational trail from the University of Manitoba (following the Rapid Transit Corridor), through The Forks, along the old CPR line that divides Gateway and Raleigh, all the way to Birds Hill Park and beyond to 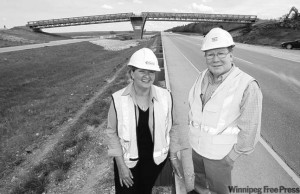 The project — which will also include landscaping and beautification, with the planting of thousands of trees and natural flowers and prairie — is being undertaken by the Manitoba Floodway Authority.

The steel bridge is necessary to hook up with the extensive trail system in Birds Hill Park, and because people are already crossing the highway there. “This is a major safety concern,” said Ronuk Modha, floodway authority communications director. The bridge is 4.2 metres wide, from curb to curb. It will have an enclosure similar to wire fencing so people can’t fall out or throw things down on traffic. There will also be a viewing area in the centre. About a six-kilometre stretch of trail between Dunning Road and Garven Road is asphalt and already completed. The rest of the trail will be crushed limestone. The floodway authority is also building a three-kilometre trail into Birds Hill Park to hook up to the Cedar Bog Trail.

People can’t cross the floodway from Birds Hill Park to the floodway’s west side when it’s full with flood water but that is only one to two months of the year, said Modha. Otherwise, people can cross at Dunning Road, west of the 59er Restaurant. This is just the floodway authority’s first phase of development. The second phase will take place on the southern portion of the floodway near St. Mary’s Road, Modha said.