Another opportunity to have a say: EPC Wednesday July 8th Pedestrian and Cycling Strategies 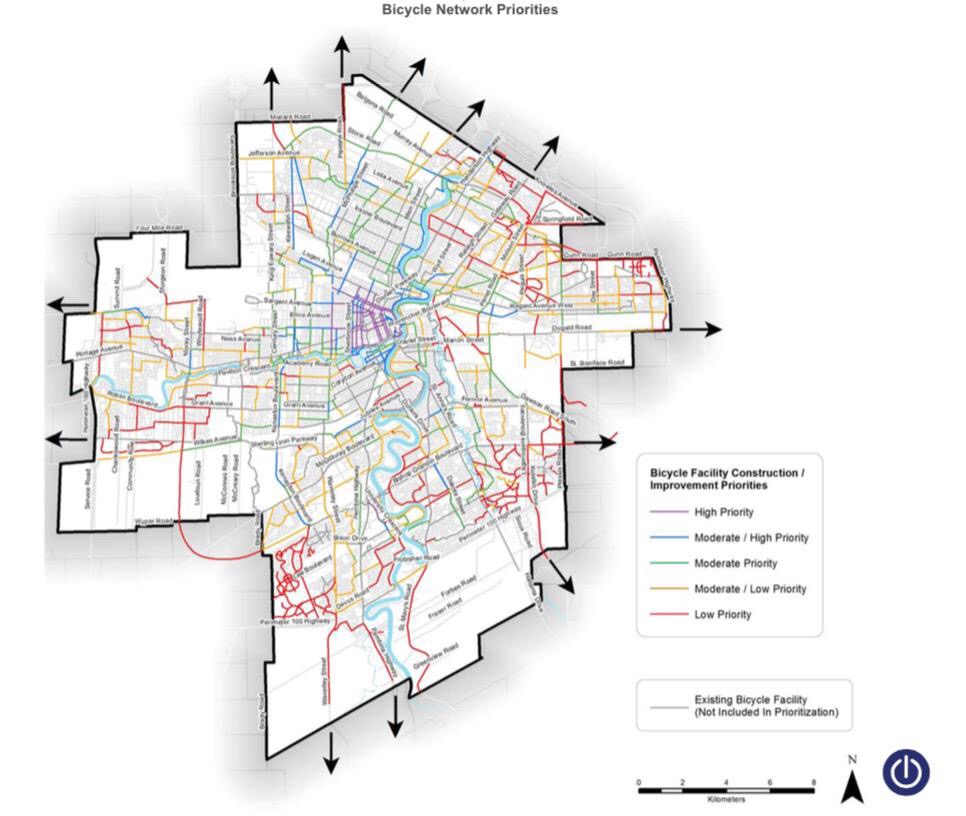 There is one more opportunity to speak about the cycling and walking strategies at committee before they are sent to council for vote on adoption.

The strategies are appearing in front of the Executive Policy Committee on Wednesday, July 8th:
West Committee Room Council Building,
City Hall, 510 Main Street
9:00am
Here is the agenda. (look for bullet 4 in the public works committee report section).

If you wish to register to speak (We urge you to come out and express your views: Whether you speak for or against, please consider attending. It is always valuable to exercise your democratic right to speak. You can register to speak by emailing the committee clerk, Carlos Gameiro, at CGameiro[a]winnipeg.ca. Note: If you are working that day or otherwise too busy to attend, note that you can also send a letter to the above email and have it included in the register and officially submitted to the committee.

We have been following this closely and are very much looking forward to Winnipeg having vision for cycling and walking. While this is far from the last time to give input (all recommendations and projects in the strategies are subject to extensive consultation and further research and approval), we look forward to – for the first time – operating in a city with an official mandate that takes walking and cycling (and scooters, wheelchairs, skateboards and strollers) seriously.

You can read all about the pedestrian and cycling strategies here.

Since 2003, Winnipeg Trails has been working with you to create a connected network of trails and protected bicycle facilities throughout Winnipeg, for everyone. All of our partners, including the City of Winnipeg, the Province of Manitoba, NGOs, stewardship groups, firms, private businesses and clubs have begun to envision walking and cycling for what it is: extremely important to the fabric of our city. Until now, we have often helped target connectivity based on when/if funding was available, sought expertise and network planning where we could find it and building trails where space could be found. In general, without an official plan, you do the best you can with what you have.

Our vast network of skilled and knowledgeable individuals and groups have done tremendous things, but we all recognized we were ready for the next step. At our most recent strategic planning session, there was unanimous consent on two things: the need for more connectivity and the importance of these cycling and walking strategies.  We are not alone. Cities across Canada have been developing walking and biking plans in haste. We need one too. And we need ours to be on the leading edge. There are incredible advantages to taking walking and cycling seriously – not the least of which is that it offers mode choice and improves the efficiency all other modes of transportation – including bussing and driving. Cities are also in competition with each other – for investment, for tourists, for innovation, for taxpayers. It is very important to recognize that liveability is an extremely important metric for businesses looking to locate and stay. Keeping one’s skilled workforce, and youth, is critical. Investing in walking and cycling means investing in a city that is modern, vibrant and forward-thinking. When it comes to transportation, it can be quite simple: give people a choice, make it equitable, make it inexpensive, make it easy, make it good for the environment, make it cool, make it healthy and make it fun. Win, win, win, win, win, win, win. 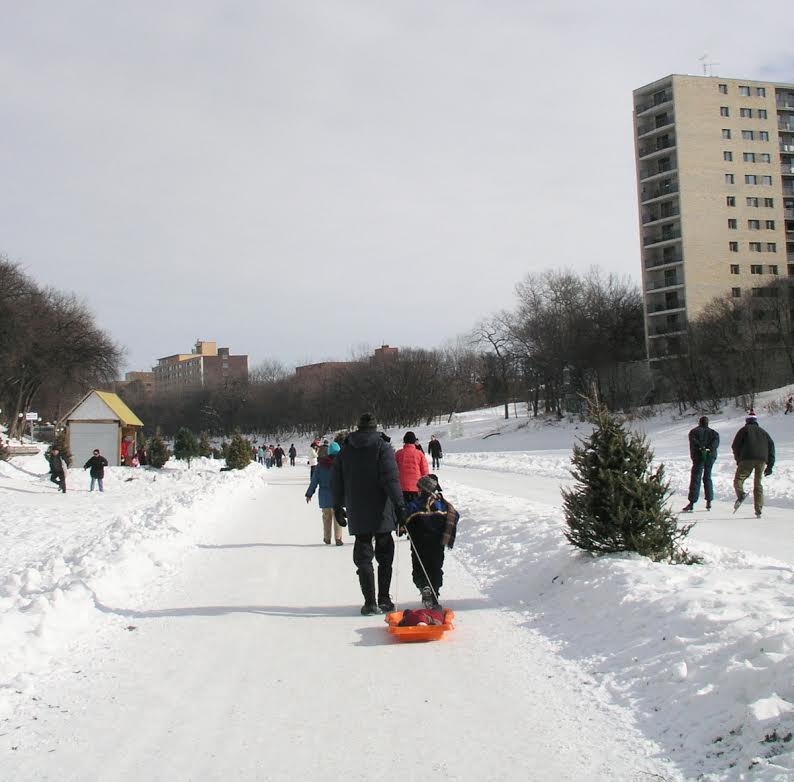 The best cycling and walking environments are created when they are treated as an essential service, just like any other part of the transportation system. In 2010, Winnipeg began to live up to its potential and spent more per capita on cycling and walking than almost anywhere else in the world. Cycling numbers jumped in the years thereafter and sparked a bike boom that we are still seeing growing today. So many people are out walking on key trails that they are nearly shoulder to shoulder in busy times. Much can be accomplished with stakeholder input and councillor guidance, but it was recognized that Winnipeg needed a long term vision based on community, councillor and professional input (for the same underlying reasons that automobiles and transit networks require a long term plan).. Soon after 2010, as part of the Our Winnipeg, Winnipeg released a master transportation plan for automobiles and buses. One of its key recommendations was the development of separate walking and cycling strategies (presumably there wasn’t enough time/budget to do the extensive consultations and work required to address these modes properly at the time). This process (the development of the cycling and walking strategies) began a couple years after the larger transportation master plan was finished and adopted. Consultants were hired, it was briefly cancelled, then reinstated due to popular demand and, ploddingly, the process began to move forward.

The report received input in numerous ways. Strategically located open houses were advertised broadly. Thousands of Winnipeggers took the time to fill out exhaustive surveys. Comprehensive and impartial telephone polls reached hundreds of random people who might not have taken the time to respond to surveys or attend open houses. The results of the random polling confirmed what we suspected all along – trails and protected bike lanes are popular, walking is important, and people want safe and connected trails in order to feel comfortable exploring the city they love. It also determined that there is a vast pool of “interested but concerned” people who are simply awaiting investment in safe infrastructure to try riding a bike. Not everyone reads the paper, shows up at trails meetings, or engages in civic issues, but it is certainly true that if you build it, they say they’ll come. And they do. As the Winnipeg Trails Association, we have seen it in action.

Representatives from Winnipeg Trails’ stewardship groups joined a large and diverse set of stakeholders from numerous different communities and causes including environmental, cycling, seniors, real estate and development, business, Universal Design and Accessibility, and more. All of whom were honoured to sit on the Stakeholder Advisory committee for two years as these strategies were developed. As the consultants did their work, Winnipeg Trails representatives were asked to give approximately 16 hours of their time each to sit on various review committees, attend a large stakeholder workshop and help raise awareness of the open houses throughout the community. They offered non-binding input and feedback, giving the consultants valuable insight. In a rare development, even young children were consulted in the preparation of this plan. A special workshop was developed locally just for them, where internationally-respected planners joined WTA, local NGOs and school children themselves to do their own down-to-earth version of the walking and cycling consultations – in a language they could understand. For once, even those under 16 we’re included in discussions on changes that affect them. They were, understandably, all for more trails. 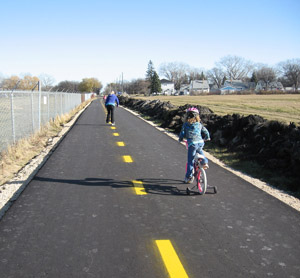 Most recently, a review of the consultation work determined that the consultation was not only adequate, but met international best practices for community consultation. It also confirmed what senior officials were saying – that all cycling and walking projects done as part of the plan would have built-in and extensive consultation as part of the design process before being implemented. The upside of recent media stories is that they too have drummed up a high level of interest. We are now at the point where almost no one in Winnipeg remains unaware of this exciting issue!

Nonetheless, the fact remains that roads in Winnipeg are still missing sidewalks, our trails are too-often sparse in key areas and disconnected, and many of our bike paths simply end. Demand is far outpacing supply and we need to catch up.

It is time to move forward.