Walk this lovely little way (Winnipeg Free Press)Winnipeg’s picturesque parkways city’s best-kept secret. Shhhhhh.It’s Winnipeg’s prettiest little secret, and we wouldn’t want word to get out. It’s not marked on city maps, not even the trail maps. And there’s precious few signs pointing the way. But unbeknownst to most Winnipeggers, there’s a web of six parkways that link park to park to park along the city’s rivers, following quiet streets where necessary, but mainly hugging the riverbanks.

And if you venture just north of the corner of Glenwood Crescent and Harbison Avenue West, you’ll discover perhaps the most picturesque spot of all of Winnipeg’s parkways, Elmwood Park, part of the Kildonan Parkway. “I can’t believe no one, either media or just a person, has asked about this,” said Janice Lukes, manager of special projects with the Winnipeg Trails Association and Rivers West, Red River co-ordinator. “But no one has.”

Many people may be travelling the parkways in bits and pieces but don’t realize they all join up. On a recent sunny day, cyclists were whizzing through Elmwood Park and south along the parkway, while a couple walked two enormous dogs and some would-be explorers checked out two mysterious staircases near the river. The Kildonan Parkway, where it wends through Elmwood, might be the most pleasant of the parkways, given to leisurely meandering, snaking along tree-shaded neighbourhoods and sun-dappled parks by the river. 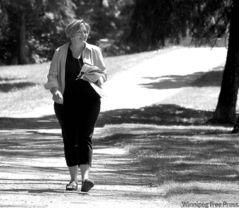 Janice Lukes,manager of special projects for the Winnipeg Trails Association, strolls in Elmwood Park at the end of Glenwood Crescent. ([email protected])

The parkway system was started 20 years ago by a forward-thinking city with a vision to make the most of its rivers, Lukes says. There were 18 smaller trails then, a very confusing labyrinth of paths, but officials organized them into six parkways to keep things simple.

Until trailheads and route maps are placed on the parkways — planned for this fall, along with signs indicating points of interest, a very pleased Lukes reports — bikers, hikers and dog-walkers need to be a little creative to find the parkways in many spots. They are signed, but signs are small and placement is a bit sketchy.

It’s worth seeking the signs because, really, a whole other world within Winnipeg opens up once you set foot or wheel on a parkway.