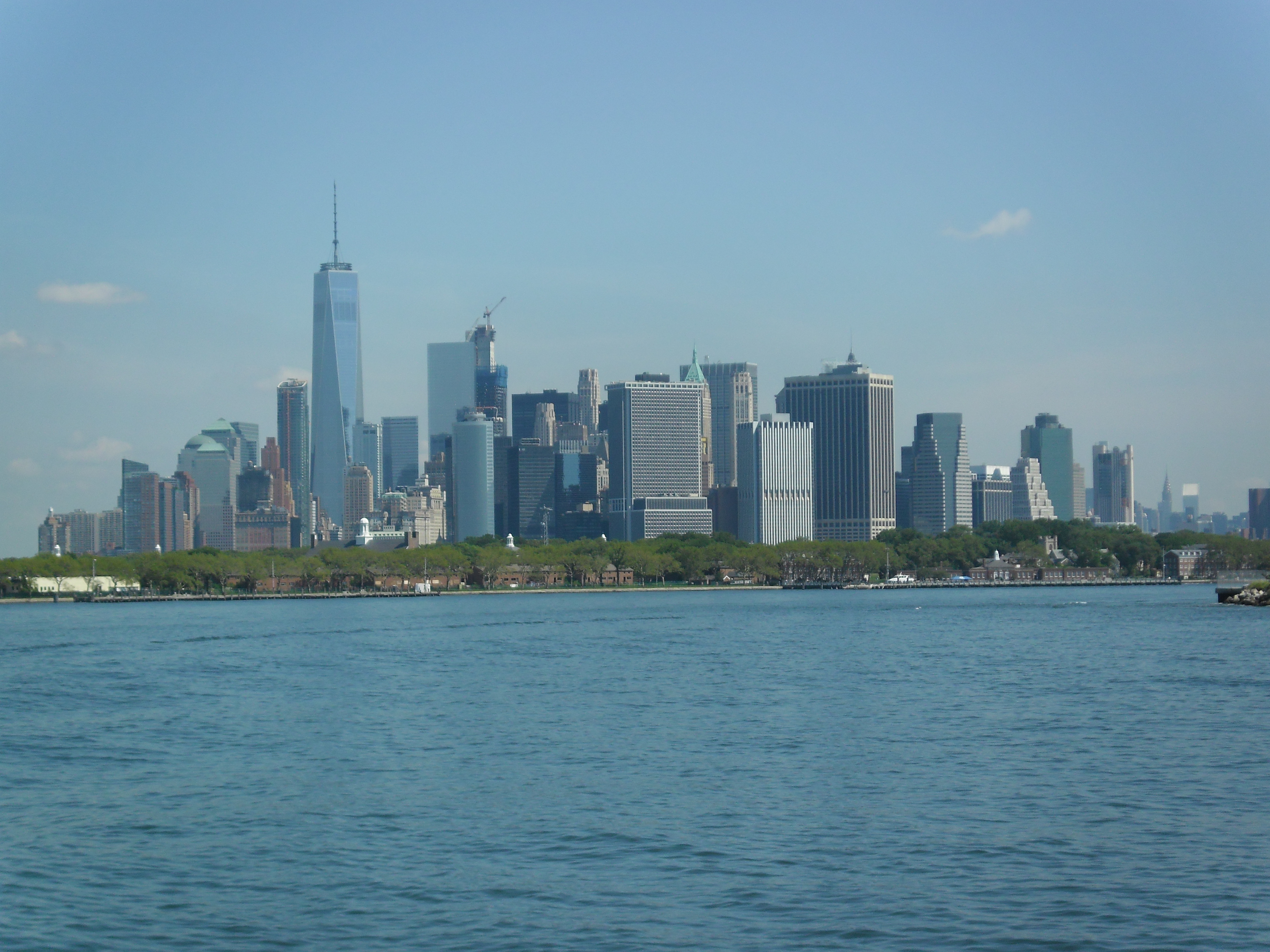 This past week me and my boyfriend (now fiancé) took a trip to New York City. I thought this was a great opportunity to compare one cycling transit system to another. Because cabbing everywhere would be insanely expensive and less efficient, we decided to bike and subway instead. Subway trips were for longer distances and we used the bikes to get around in the neighbourhood we were staying in (The Village) and to explore Central Park. For those who have never been to NYC they have a city wide bike service in place called Citi Bike. Here is their website if you are keen on learning more : https://www.citibikenyc.com/ . Basically, the system requires you to pay for a membership that includes a little key to unlock bikes from stations around the city. We paid for one day of unlimited 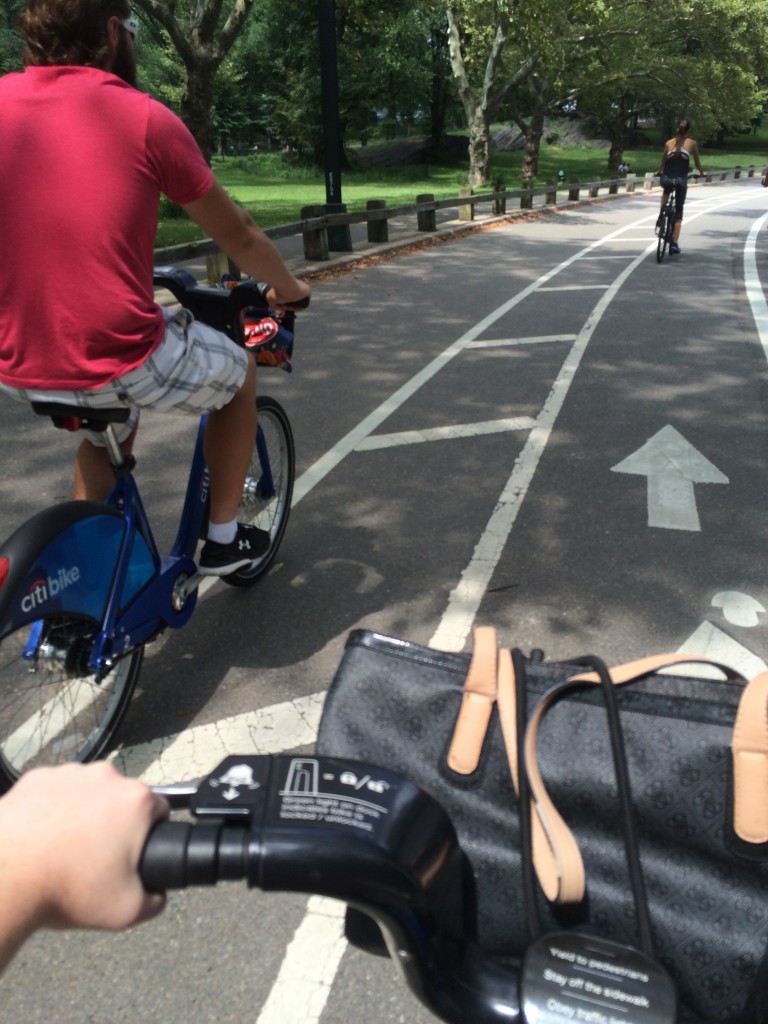 trips, but residents would use the annual membership. You use the key to unlock a bike and ride it to another station where you return the bike. I was amazed at the ease of renting the bikes and zooming around town. We used one trip to get from central pack to the restaurant we ate at in the village, then back to our hotel. (Left is a picture I took while riding the Citi Bike in central park.)

Pros and Cons of Citi Bike: I am very small and the large sturdy frame was a lot for me to handle. Even with the seat all the way down my feet did not rest on the pavement comfortably. The bike stations were copious in the Village but around other places they were fewer which made biking directly to a destination difficult. (They do have more stations in construction/planned.) The app they have which marks where the stations were was very helpful. I loved the little basket for my purse. There are automatic blinking lights for nighttime riding. Lastly, depending on the time of day you could walk to a bike station and have all the bikes be gone and have to find a new station, or have the opposite problem which is trying to drop off a bike at a station with no empty spots. (full of bikes)

The Citi Bike program would not be as successful if it were not for the glorious infrastructure NYC has made for bikes. On all large busy streets (eg. Fifth Ave.) there was a bike lane. Many smaller adjacent streets had one too. The only streets that did not have one were small one block length and I found cars respected the cyclists. Central park had AMAZING bike traffic lanes. There were bi-directional lanes and some parts were even restricted to just bikes and horse carriages (no cars). There were so many bikes they had to put bike speed limit signs for the downhill slopes. I was first nervous to bike in NYC because I do not bike much on streets. However, I was totally comfortable after half a day of riding around. The only issue I had were taxis pulling into bike lanes to let people out or pick up people and cutting me off in the process. However if the light was green and I started to go a pedestrian would respect me like I was a vehicle. I also had a bell to warn other pedestrians or people on bikes that I was a force to be reckoned with. What was also nice is if a light turned red or if an intersection was very pedestrian heavy, we could jump off (me slowly struggling off) our bikes and walk across the street as a pedestrian. This was not a problem at all.

Comparing this to Winnipeg is laughable. There are very few bike lanes and they are not in the busiest areas of town. Cars do not respect bike travel and are aggressive to people on bikes. Parks usually do not have bike lanes and many paths are a free for all. Paths and trails that do have separated traffic flow are just for direction, not mode of travel. There is no bike rental service that compares to Citi Bike unless you count renting double bikes around The Forks. For the most part, Winnipeg is build for cars and cars only. I think if Winnipeg got a program like Citi Bike and made more connected bike lanes it would force better traffic flow and safer speeds. My fiance who is from a small town in Manitoba and loves cars said he would bike when he came to Winnipeg if there was a bike service like this. I was so surprised when he said that and I think that shows that if biking was fast, safe, and affordable people of all walks of life would use it. I for one would definitely park and bike when downtown/at university if I was not afraid for my life.

Lastly, I want to talk about the stigma around biking in Winnipeg. People hate people on bikes. Only a very small percentage of people are happy to see people on bikes, most drivers loath bikes on the road. So, when riding a bike I automatically feel like a huge nuisance to everyone.  In NYC I felt like a part of a cool bike club.

Sam is a Trails Analyst summer student with The Winnipeg Trails Association. She is working towards a degree in Environmental Studies at the University of Manitoba with a focus in Natural Resource Management. Her hobbies include reading, bike riding, camping, watching and posting on YouTube, and various forms of paper-crafting and planning.