When Winnipegger Jamie Court and her family tackle the Mantario Trail, she could swear she’s been transported to the set of one of her favourite fantasy flicks.

The cinematic experience starts about 30 minutes into her hike.”You see this beautiful creek and it’s all sparkly,” says Court, 21. “Then there’s thick, lush bush you’re surrounded by. It’s almost like Lord of the Rings. There are these huge trees — almost like people standing there.

“It’s like nothing you’ve ever seen before.”For the young woman, hiking the Mantario Trail — a rugged 63-kilometre path located in Whiteshell Provincial Park — is an annual family tradition. Since she was 14, she has laced up her hiking boots, filled up her backpack and taken the several daylong hike with her mom, dad, sister, uncles and cousins.

“It used to be very big in the early ’80s,” says Court, a hairstylist in training who took her first wilderness trail trip with her family when she was a toddler. “Groups of younger people would go hiking in the Whiteshell or canoeing. They would just have a big camping trip together. At that time, she says even her grandmother would tag along.

It’s a ritual her father Alan, 48, a steamfitter, feels is important to pass along to his children — a sort of rite of passage he hopes teaches them to appreciate nature and the benefits of physical activity.

“(The trails) beat us some times but we try to get out on them at least once a year or more,” says the Crescentwood resident, who has fond childhood memories of “riding around on the monkey trails in Assiniboine Park.”

He admits that hiking his favourite trail, Mantario, requires a certain level of fitness, safety knowledge and a willingness to rough it. But anyone who is prepared can do it, regardless of profession or background, he says.

“I work in the trades,” says Alan. “My brother is an accountant. You just have to enjoy a bit of a challenge in the countryside.”His daughter wouldn’t have it any other way.She loves the feeling she gets when she’s completed a hike — a strenuous trek that requires crossing beaver dams, walking and climbing for several hours a day, all while toting a backpack full of supplies.”I feel like I’ve gone through a cleanse,” says Court. “You feel like you’ve worked out hard every day for six hours. You feel really fit.” 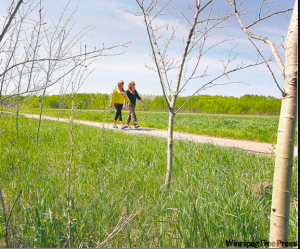 Meanwhile, Court and her family use city trails in the Assiniboine and Charleswood forests during the week, especially after dinner at her grandma’s house.”It’s a different kind of hiking, but it’s still nice to take a walk with your family,” Court says. “I think it’s a good activity instead of watching TV. It’s usually a really happy time.

People are laughing. You’re outdoors so you’re more carefree. You’re getting exercise.That’s the vision Janice Lukes has for the city. The trails activist, who heads the Winnipeg Trails Association, wants more Winnipeggers to use trails around town and across the province.

In the past five years, she says more than $40 million has been spent on trails and cycling infrastructure around Winnipeg — $20 million just last year alone.Right now, she’s helping promote International Trails Day, which takes place June 4. Dozens of trail-related activities are scheduled around the city.

The day will also promote rural paths that are part the Trans Canada Trail — a federal effort to build the world’s longest network of trails.Today, more than 16,500 kilometres of trail have been developed nationwide, 1,400 kilometres of which is in Manitoba.

For years, Lukes, a mother to eight-year-old triplets, has enjoyed the meandering trails of Winnipeg. These little wilderness gems hidden within the city go through river-bottom forests, wind through open fields and snake along abandoned railbeds.

Lukes can’t pinpoint her favourite one. But she’s in love with a new route she’s discovered —the Yellow Ribbon Greenway Trail located in St. James. There’s a spot on the trail near the Richardson International Airport that gives trekkers a clear view of landing planes.

She and her family recently spent a few hours on the four-kilometre trail.”The planes were flying right over top of us,” says Luke, her voice inflected by her excitement. “How often do you see the bellies of these big planes land above your head?”

For Lukes, trails are an antidote to the digital age.”It’s unbelievable the draw that these electronic gadgets have,” says Lukes. “It’s like a drug. It’s scary.”Kids… you have to pull (the electronics) out of their hands. The more we can get out and have great adventures on trails, the better.”