Winnipeg has more than 3,300 hectares of green space, made up of parks, gardens, trails, grasslands, forests, ponds and streams. Assiniboine Park, modelled after New York City’s Central Park and home of the multimillion-dollar Journey to Churchill exhibit, gets most of the attention. But there are dozens of lesser-known parks throughout the city. In this summer series, Free Press reporters shine a light on some of these under-the-radar ecological gems. 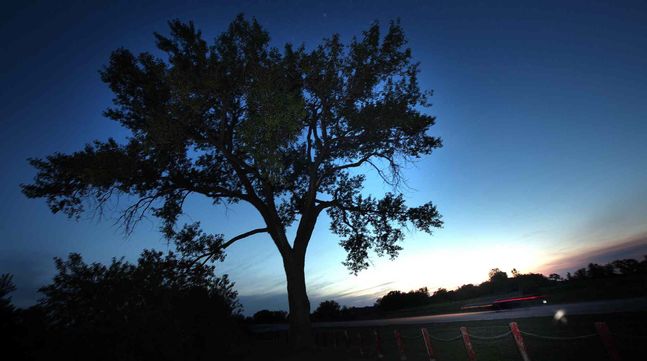 On the northern boundary of Little Mountain Park, just south of Farmer Avenue in the RM of Rosser, a giant cottonwood tree stands tall.

The tree, which is more than a century old, is a majestic hunk of wood, its trunk as thick as a train. The branches stretch far up to the sky, reaching in every direction and creating a canopy that colours most elm-lined streets inside many of the old Winnipeg neighbourhoods green with envy.

The tree is a landmark, a postcard — and might be haunted.

“It does have a reputation of being a place where paranormal activity exists, that’s true,” offered Tazz Norris, the lead investigator for the Winnipeg Paranormal Group (WPG). “And there are accounts of people seeing orbs and feeling ill at ease when in the presence of the tree. I’m just not sure its history holds up, though.”

The sordid tale of the potentially evil tree reads like this: Back before the park was a park (the area was known as Mount Royal and Little Stony Mountain), the mighty cottonwood was rumoured to have been used as a lynching tree by the Ku Klux Klan.

However, before you ring the Ghostbusters, it should be pointed out there is no historical strength to support this claim. Norris and a handful of local paranormal aficionados say there is no concrete evidence the tree was used for this purpose — even if the bark on some of the branches looks twisted.

Norris said the last time WPG took a look at the tree, in 2010, there was nothing out of the ordinary to report.

That doesn’t mean one doesn’t experience an eerie feeling when in its presence, though. There is something to this encounter — maybe it’s just the urban legend associated with it or the physical size of the tree itself — that leaves one uneasy.

“I’m not saying it’s not haunted,” Norris said. “It could very well be, and the fact there is a lot of limestone in that area is something that we would consider notable.”

The tree stands on a limestone ridge left by the Lake Agassiz glacier, a ridge that was developed as one of Winnipeg’s first limestone quarries in 1896. There are still traces of that work around the site, and the quarry now serves as a pond for park visitors.

Limestone, according to popular paranormal theory, is an excellent recorder of past events. The rock holds the memory and energy of traumatic events, like a geological video camera, and has the ability to press play on that energy at certain moments when conditions are right.

“Places with large amounts of limestone or quartz, with the bedrock near the surface, tend to have some activity around them,” Norris said.

Officially designated a civic green space in 1965, Little Mountain Park is located in the northwest corner of the city, tucked away behind Players golf course at Inkster Avenue and Brookside Boulevard. The ‘maybe-haunted’ tree and quarry are on the north edge of the 160-acre park, next to a large section of thick aspen forest.

Inside that forest, a network of wood-chipped trails is available for hikers and mountain bikers who wish to wind their way through the various small wildlife and forest floor vegetation. There are a handful of fire pits and picnic areas tucked away off some of the trails, as well.

Little Mountain also boasts one of the city’s more popular off-leash dog areas, with a large section of grass set aside for canines on the western edge of the park along Klimpke Road.

Republished from the Winnipeg Free Press print edition September 2, 2014 A7