Winners of pond-naming contest inspired by nature and local history. When it comes to the name game, they’re the champs.

Now, Pond 1 – located near River Road – is called Apakway Pond, thanks to resident Melanie Burt, a student at the University of Manitoba.Pond 2 – located close to St. Mary’s Road – is now Eagles Pond, a name courtesy of Guent Salzman, a retiree who lives in the area with his wife. And finally, Pond 3 – located just west of St. Anne’s Road near Home Depot – has the new moniker of Nature’s Haven, thanks to Grade 8 student Nicole Hallett.

Burt explained that Apakway is the Ojibwa word for cattails, which encircle the pond. She felt the name would also remind people about the greenway’s past.“Since the area was originally inhabited by aboriginal people, namely Ojibwa, I thought it was appropriate,” she explained. Burt, who lives about 10 minutes from Apakway Pond, said she often uses the greenway for jogging or walking. She said she thought the contest was a good way to engage the community.

“It brings more ownership towards (the ponds),” she said. “Naming them makes people more proud of the place.” Salzman chose the name Eagles Pond also because it blends history with the natural elements surrounding the greenway.While he says he’s seen a number of bald eagles in the area lately, his real inspiration for the name was the Eagles Athletics Club in the 1920s. The club is one of Salzman’s earliest memories of St. Vital from when he first moved to the area as a 12-year-old. 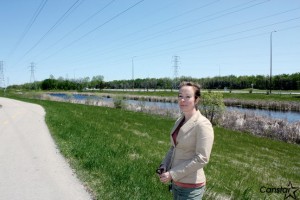 Melanie Burt stands next to Apakway Pond — formerly Pond 1 — along the Bishop Grandin Greenway. Burt suggested the name Apakway, which means ‘cattail’ in Ojibwa, to remind people of the area’s history.

“Several neighbourhood kids were allowed into the clubhouse to just sit and watch,” he recalled, adding he has fond memories of watching boxers practice in the club during the long winters. “It was a place to go and be warm.” Salzman added he was glad the ponds were named by residents, instead of by politicians who may have chosen names that don’t mean much to the community.“I don’t think much of the naming of Bishop Grandin (Boulevard), I’ve never heard of the guy,” he explained.

Hallett, a Grade 8 student at Victor H. L. Wyatt School, suggested the name Nature’s Haven for the last pond after encountering the word ‘haven’ in a book.

“I just kind of thought it went well with the pond, because it’s almost like a paradise,” said Hallett, who often takes bike rides along the greenway.Hallett added she was very proud that her name suggestion was chosen among all the other entries – including some from her classmates.“My best friend was saying it’s cool, because now I’m part of history,” she said.

Michelle Meade of Bishop Grandin Greenway Inc. added there were many wonderful suggestions among the 107 entries for the contest.The judges liked some of the names so much they decided to incorporate three more into the pond namings.

A section of the trail near Apakway Pond will be identified as Bittersweet Way, in commemoration of the bittersweet vines that grew in the area during the 1930s and ’40s, which were sold by children at five cents a bunch.One of the bays of Eagles Pond will be names Beetle’s Bistro Bay, in reference to the damselflies, snails, toads and tadpoles that live in and around the water.Finally, one of the bays of Nature’s Haven will be called Flutterby Bay, to recognize the Monarch butterfly waystation established by area students in the area.